3 Ways to Get More Production Out Of Your Centerless Grinder

In the fast-paced world of manufacturing, we need to be as efficient as possible to meet production and cost-per-piece goals.  Below are a few sometimes overlooked practices that will increase your production.

Your centerless grinder has been grinding away for hours and perfect parts are flying out of the machine right on schedule. You’ll meet daily production volumes without a glitch and without a worry.  Today has been a breeze, you think to yourself.  Just as you’re wrapping up your day, you get a call from the centerless grinding machine operator.  He has had to stop production to change a filter.  A bit of a glitch, but nothing serious.  The filter is changed in 30 minutes and production is back up.  The phone rings again, a much more serious problem has arisen.  The spindle bearing on your centerless grinder has gone bad and production has ground to a halt.  You can forget about running the machine for the rest of your workday or during the shift that follows.  Downtime mounts.  Costs grow.   Next comes the dreaded call to your boss.  Your day and evening are ruined.   Preventive maintenance could have saved you much grief.

Although machine uptime is key to meeting production, quality and cost goals, preventive maintenance (PM) is overlooked regularly.   Whether a quick fix or a major repair, such as the above-mentioned filter and spindle issues, these production zappers could have been avoided had an established PM plan been in place.  That PM plan, with its regular check-ups, would have alerted you to the potential spindle bearing issue, prompting you to order and have a new spindle in stock before the machine went down.  Often heard is, “Well, I keep spare parts on the shelf.”  That’s great, but having a part available doesn’t eliminate unplanned downtime.  Instead of the machine dictating when to replace a spindle, you should be the one who decides when to replace the spindle, which would preferably take place on a weekend to avoid lost production time.

Often, the maintenance department is asked to “Band-Aid” a machine issue.  Most half-hearted fixes lead to bigger problems and more downtime.  Not all issues are foreseeable, but a PM plan will, at minimum, reveal potential problems.  Reputable grinder dealers will provide a PM plan for their machines.  Most manufacturers offer a quarterly plan that they will implement on a regular basis. Learn about TGS’ preventive maintenance service for its CNC centerless grinding machines.

Automation, which can be as simple as adding bowl feeders or as extensive as adding a fully integrated robot with post-process gauging, has a number of benefits in a high-volume production environment.  Most importantly, it removes the operator’s mood (good or bad), willingness to work, and speed from the machine-loading equation.  No longer will you be dependent on the operator to hand load your grinder or conveyor.   Once relieved of the duty of loading the grinder or the incoming conveyor, the operator can now manage multiple machines.  And contrary to popular thought, this added responsibility leads to improved part quality and production. Here’s why:  An automated machine allows the operator to focus on checking part quality instead of loading, while still meeting production goals.  More quality checks allow identification of potential part problems before they reach an out-of-specification condition. Learn more about TGS CNC centerless grinder automation options.

One of the simplest ways to maximize production is to keep your machine clean.  Who among us hasn’t determined the quality of plant management judged solely on the facility’s cleanliness?  A clean facility serves not only to impress visitors or customers, but also instills a sense of job ownership in employees, whether a grinder operator or a forklift driver.

Grinding produces a lot of swarf, which is a combination of fine metals and broken-down grinding media.  Swarf is carried through and out of the machine in the coolant, which sprays over the production area.  Let’s say that the operator turns the machine off at the end of her shift.  The coolant now drains out of the machine, but the swarf remains and begins to harden.  Repeat this process multiple times and before you know it, the swarf has built up and gets into places where it shouldn’t.  The machine door no longer closes properly due to accumulated swarf.  The coolant now leaks all over the floor.  The machine must be shut off to dig out hardened swarf.  The latter might be a brief task, but it still causes lost production and can lead to wasted production as scrap potential is higher on machine restart.   If swarf makes its way under a seal and allows coolant to flow into places it shouldn’t, a more serious condition can arise.  A bearing could fail prematurely, which would be a huge downtime issue.  The moral of the story:  Take ten minutes at the end of every shift to spray your machine and wipe it down.  Not only will it eliminate big problems, it makes the machine look nice, too. 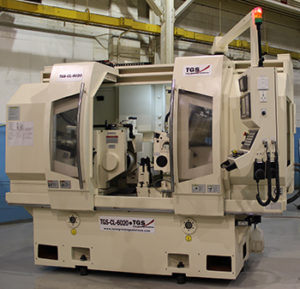 X
We use cookies on our website to give you the most relevant experience by remembering your preferences and repeat visits. By clicking “Accept All”, you consent to the use of ALL the cookies. However, you may visit "Cookie Settings" to provide a controlled consent.
Cookie SettingsAccept All
Manage consent

This website uses cookies to improve your experience while you navigate through the website. Out of these cookies, the cookies that are categorized as necessary are stored on your browser as they are essential for the working of basic functionalities of the website. We also use third-party cookies that help us analyze and understand how you use this website. These cookies will be stored in your browser only with your consent. You also have the option to opt-out of these cookies. But opting out of some of these cookies may have an effect on your browsing experience.
Necessary Always Enabled
Necessary cookies are absolutely essential for the website to function properly. This category only includes cookies that ensures basic functionalities and security features of the website. These cookies do not store any personal information.
Non-necessary
Any cookies that may not be particularly necessary for the website to function and is used specifically to collect user personal data via analytics, ads, other embedded contents are termed as non-necessary cookies. It is mandatory to procure user consent prior to running these cookies on your website.
SAVE & ACCEPT